I believe this is the author's first book. So not only a new author to me, but to all his readers!

Update (May 7): I forgot to add this to the Literary Escapism blog's New Author Challenge 2013. I've done so now! 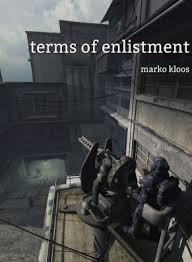 Terms of Enlistment
by Marko Kloos
Series: I hope so
Genre: Military Science Fiction
Published by: Frostbite Publishing, 2013
E-book, Purchased
293 pages
Grade: B+
Synopsis: The year is 2108, and the North American Commonwealth is bursting at the seams. For welfare rats like Andrew Grayson, there are only two ways out of the crime-ridden and filthy welfare tenements, where you're restricted to 2,000 calories of badly flavored soy every day. You can hope to win the lottery and draw a ticket on a colony ship settling off-world, or you can join the service.

Andrew chooses to enlist in the armed forces of the North American Commonwealth, for a shot at real food, a retirement bonus, and maybe a ticket off Earth. But as he starts a career of supposed privilege, he soon learns that the good food and decent health care come at a steep price…and that the settled galaxy holds far greater dangers than military bureaucrats or angry welfare rats with guns.

I enjoyed this book very much. It's an exciting adventure story. Written in first person, present tense...gives it an immediacy...it's a bit like a journal or listening in to Andrew's thoughts. The author does a good job with the mechanics of writing this way. I don't imagine it's that easy. The book is self-published, I think, but the editing and writing are first-class.

The book opens with Andrew getting ready to leave the next day for his enlistment in the North American Commonwealth (NAC) military. These opening pages give the reader a flavor of the life he's led in the tenements where he was born and grew up. This is a good backdrop so we know why he's so determined to leave, succeed in the military and get off polluted, overcrowded Earth.

We experience the life of a recruit with Andrew as he learns the discipline and skills required in a military...what thousands of other recruits have learned through the ages.

It feels strangely liberating to do precisely as instructed. I don't have to worry about displeasing the sergeant as long as I follow his orders exactly. For now, I resolve to not even scratch my nose unless being ordered by someone with chevrons on their collar.


It feels a bit like a college dorm, only with guns and uniforms, and instead of learning trigonometry or North American History, we learn better ways to kill people and blow up their stuff.


This book does a good job of letting the reader discover the world through Andrew's eyes rather than with an omniscient POV. The book has some romance in it, but as happens in military life Andrew and Halley have to go their separate ways after Basic Training. But they continue to correspond with each other. Mr. Kloos also shows the closeness one feels towards comrades when in a unit together. Each person counts on his fellow soldiers. We've seen that comradery in recent years as soldiers in Iraq and Afghanistan are eager to return to their unit even after terrible injuries. They don't want to let their fellow soldiers down.

Andrew's military career has its ups and downs, doesn't always go the way he wants it to and he's not always sure he's made the right decisions, but he learns a lot during this book and is a different person than the "welfare rat" we see at the first of the book although the seeds were already there...his absolute determination to work toward a goal (leave the tenements and Earth). Much of the book is a real page turner and I hope Mr. Kloos is writing another book about Andrew and that it will soon be available!

Jan
My husband and I recently moved to the Washington, DC area for his job. Our three children are grown and all live in different states in the U.S. My husband and I are getting used to our empty nest!

Some of My Books